Some text as placeholder. In real life you can have the elements you have chosen. Like, text, images, lists, etc. 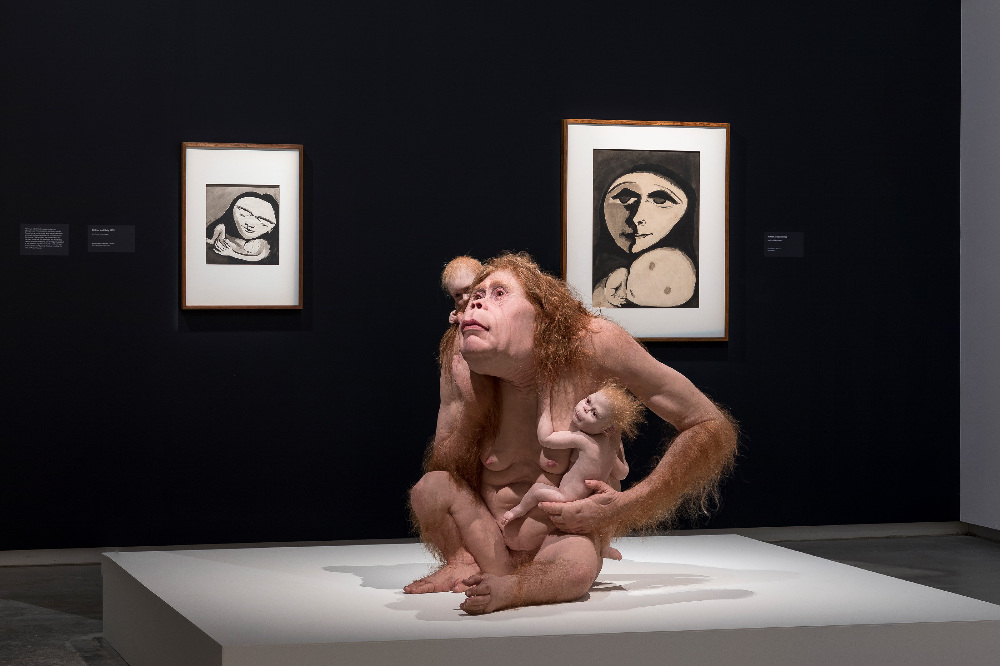 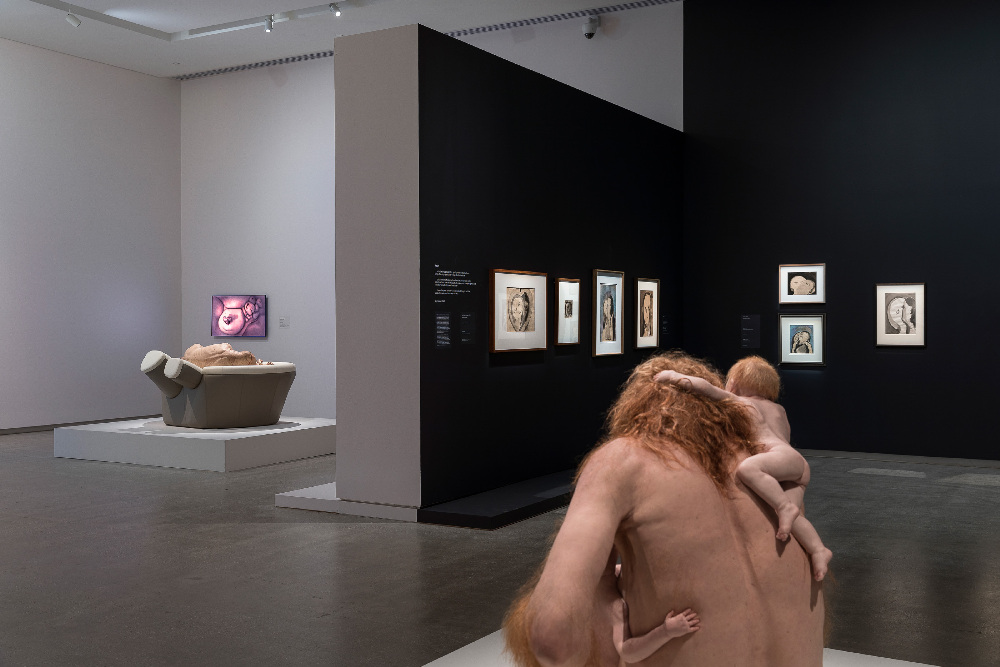 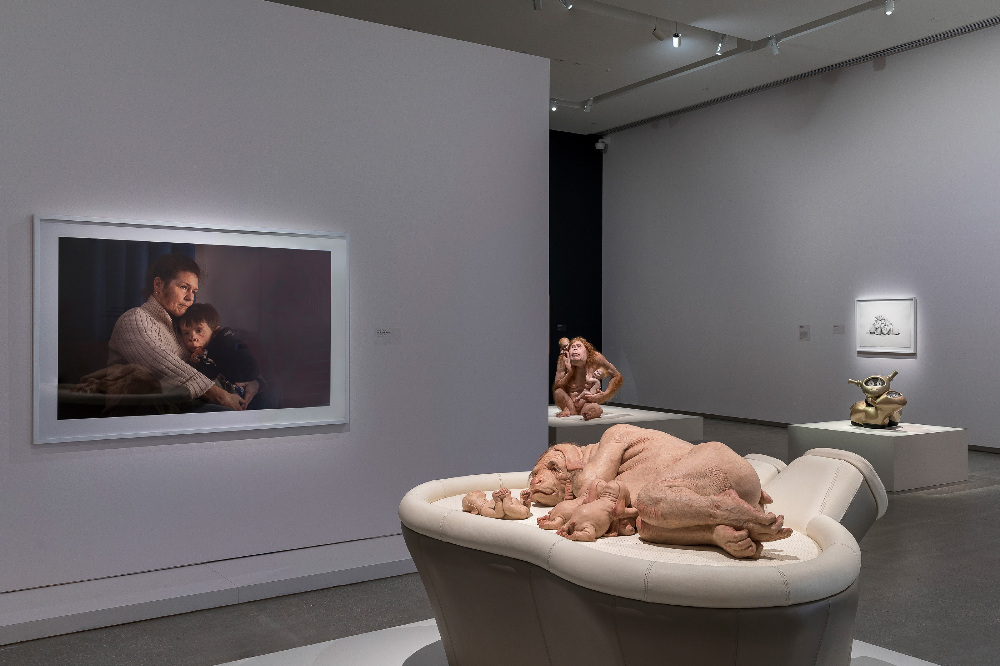 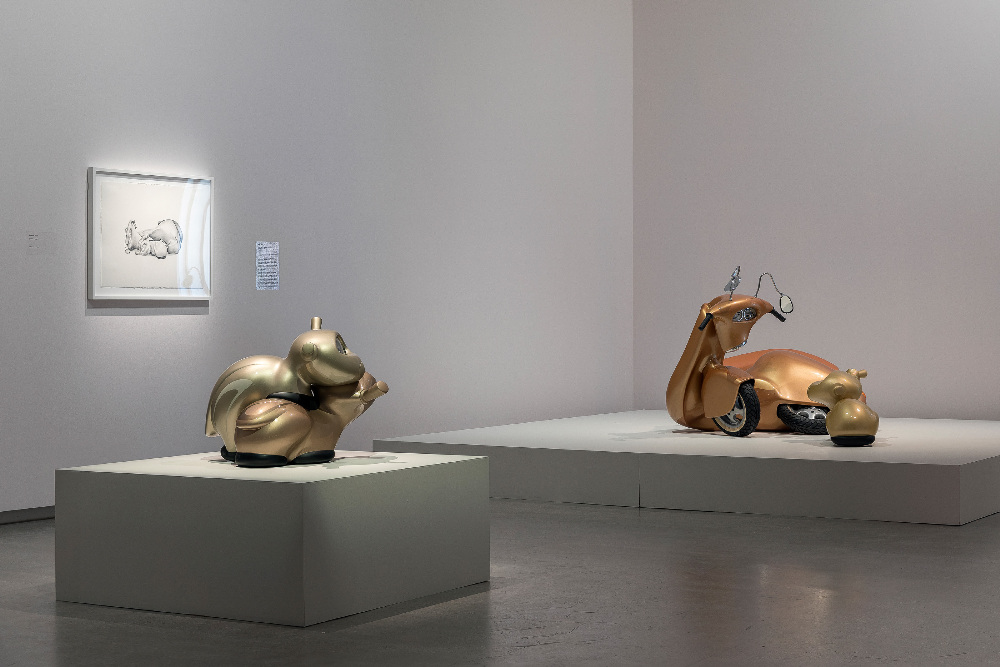 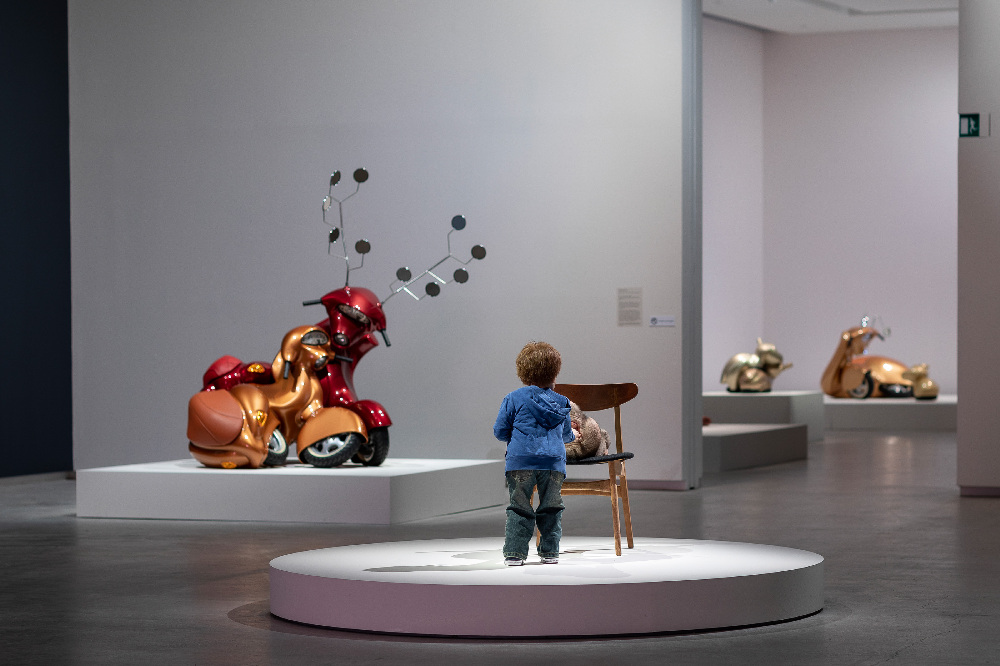 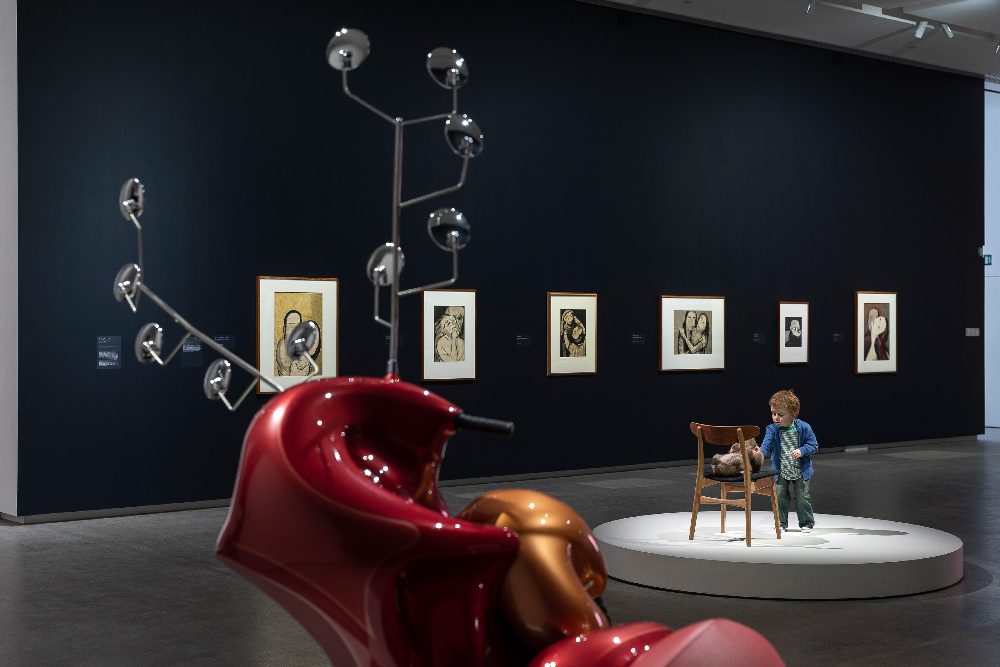 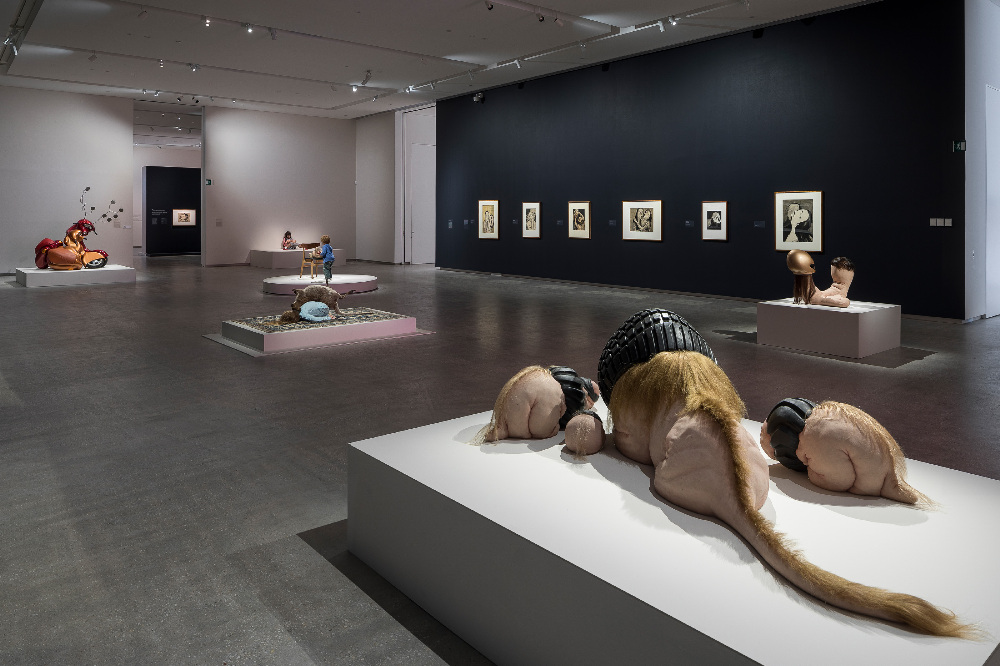 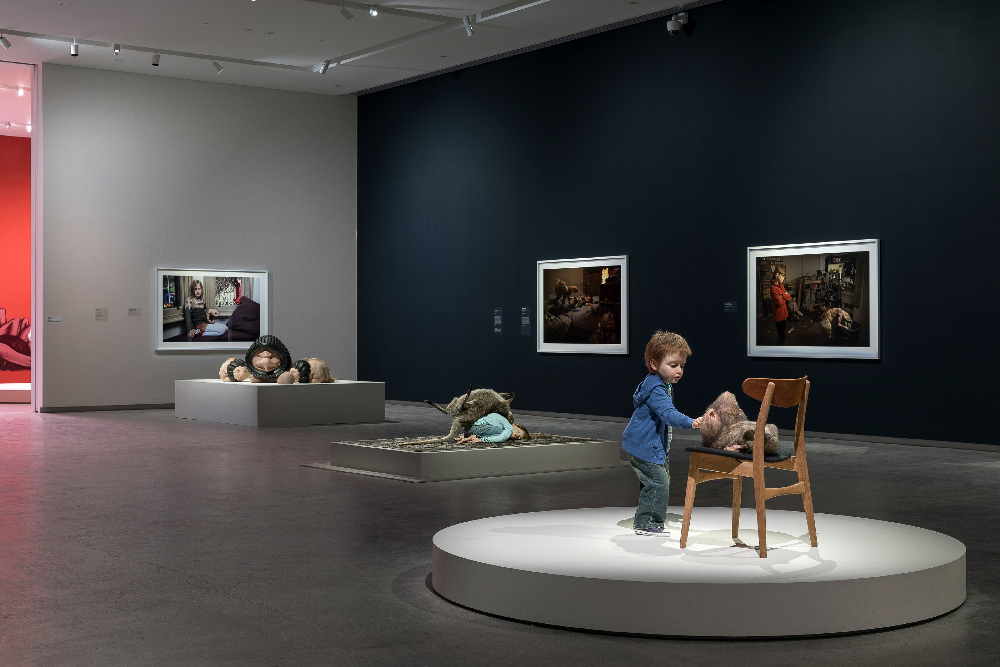 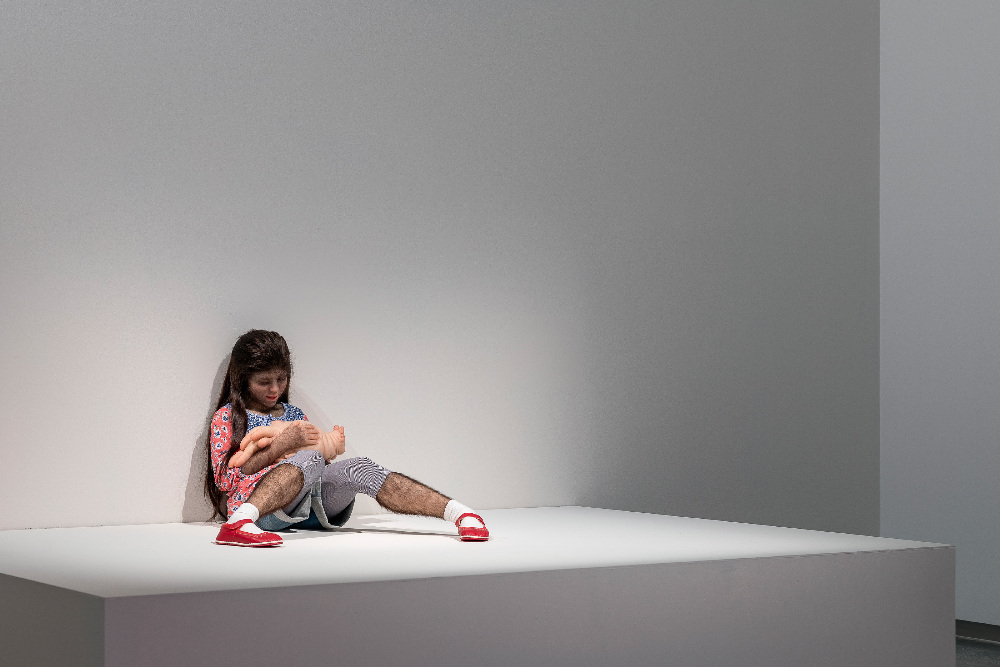 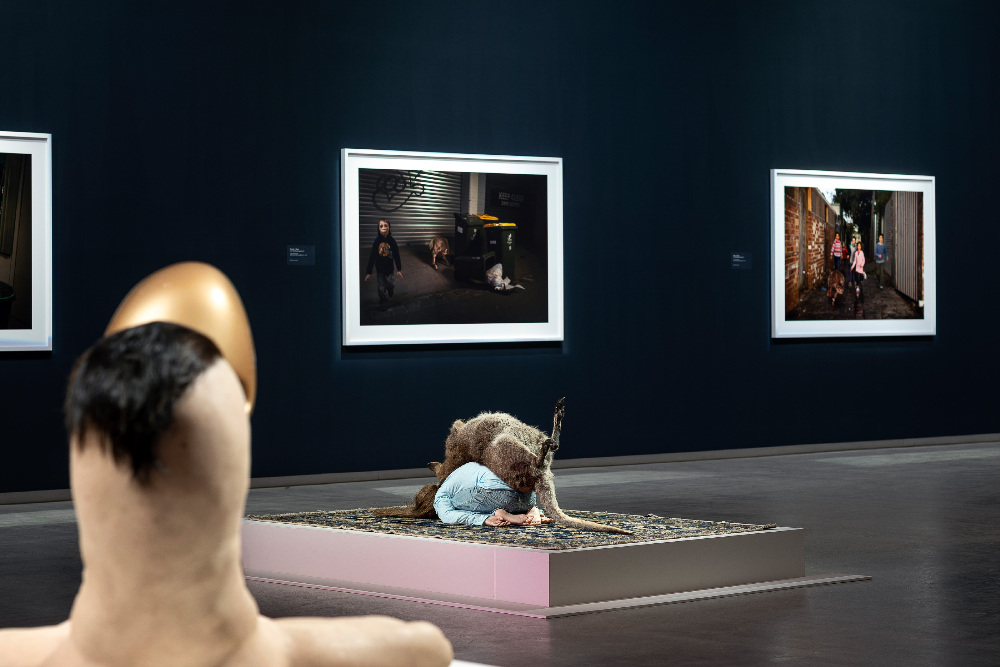 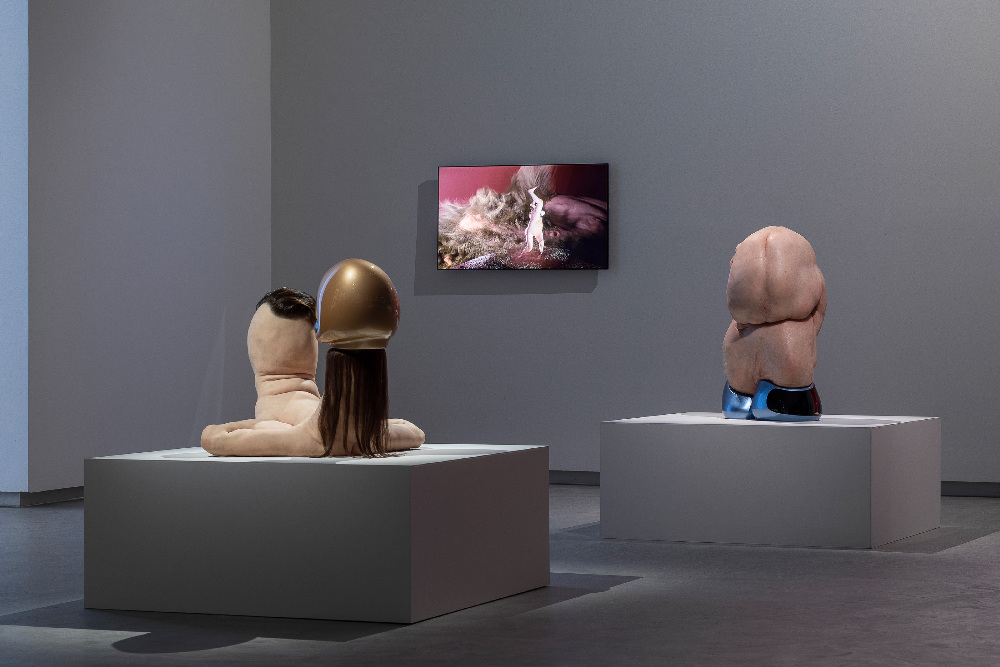 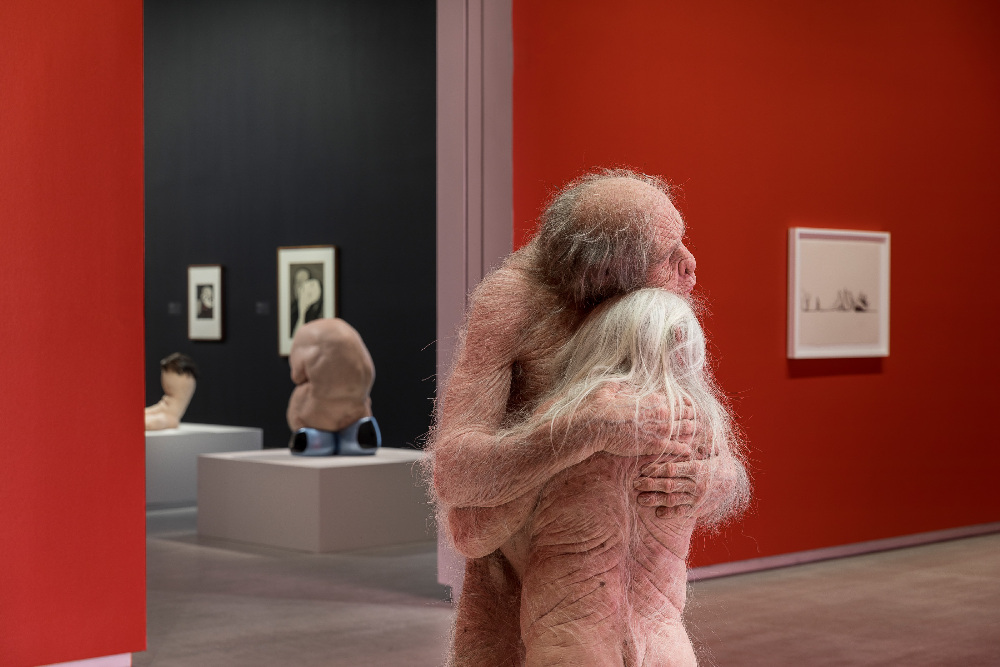 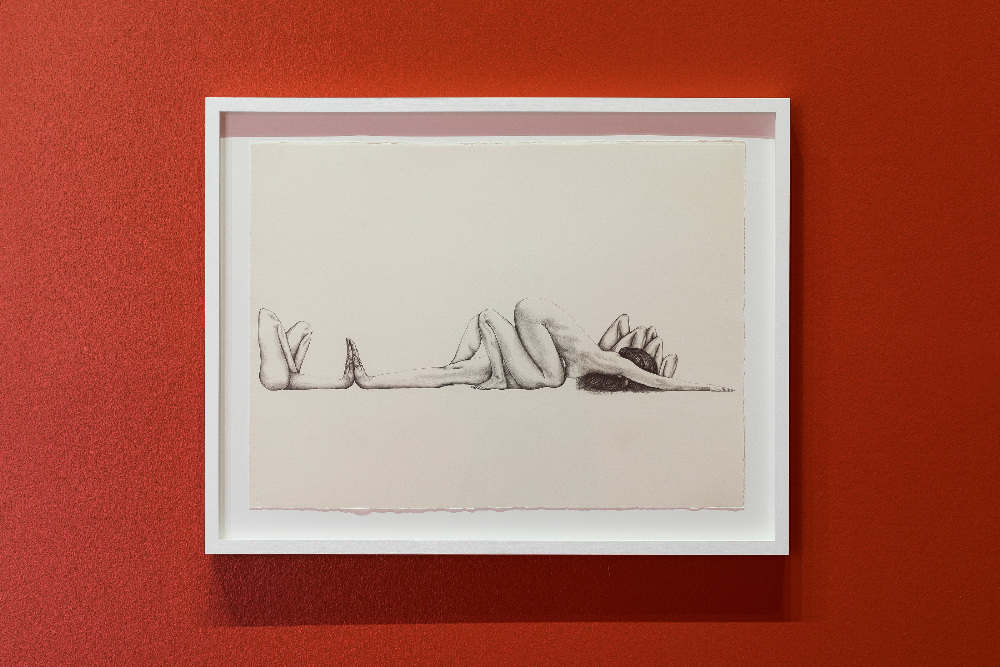 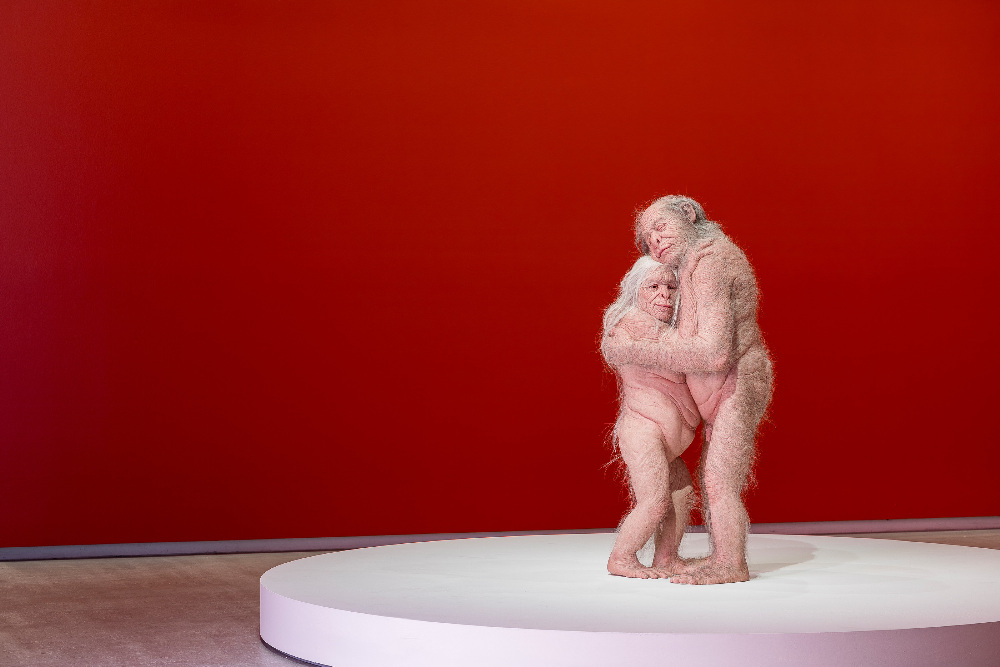 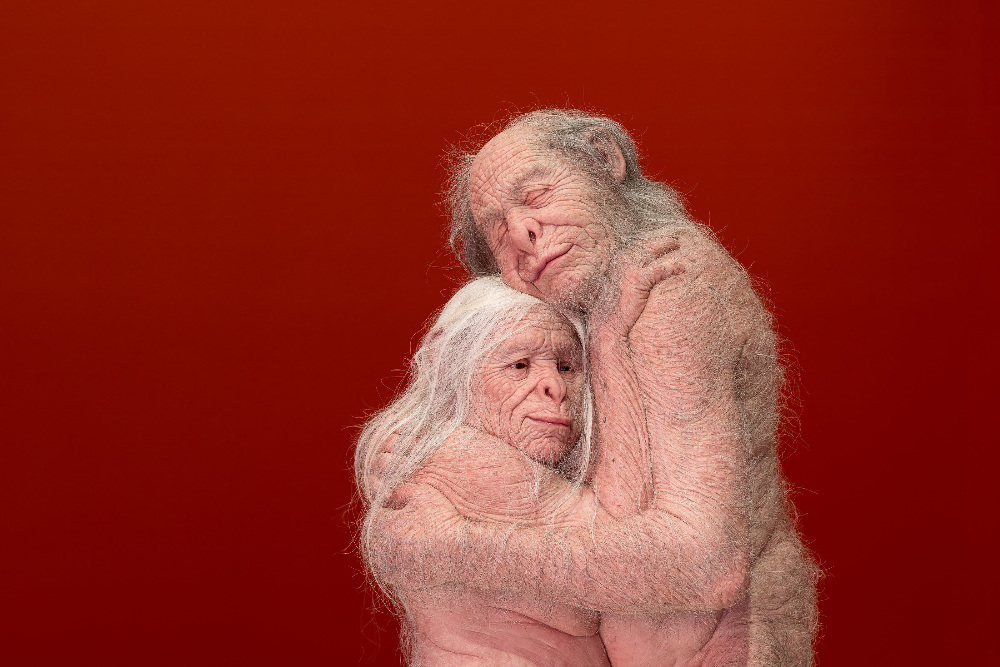 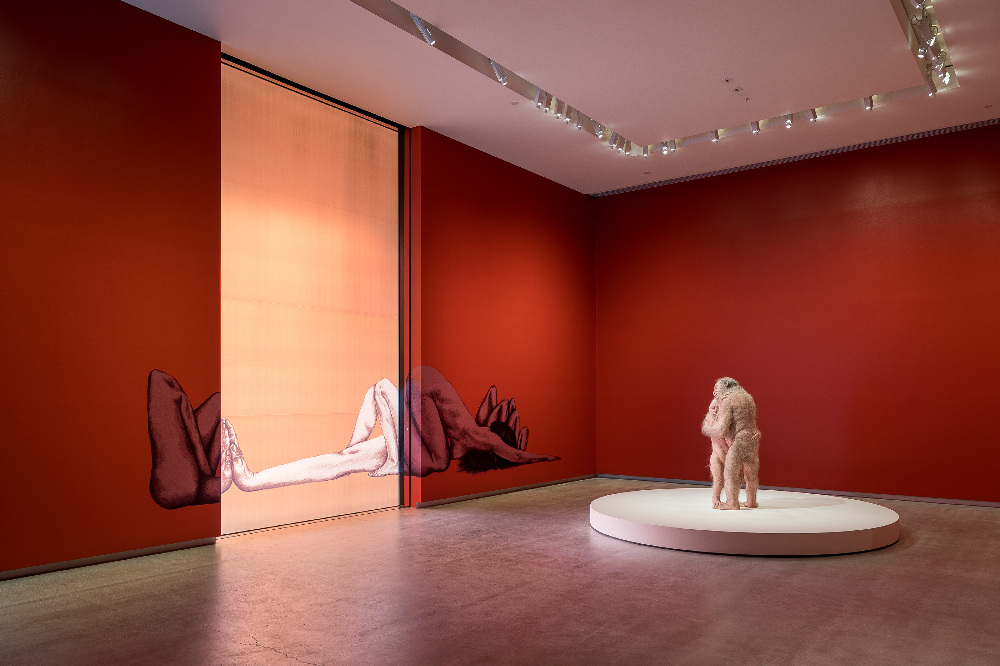 Patricia Piccinini & Joy Hester: Through Love is an exhibition that reveals shared explorations of love, intimacy and relationships in the work of two of Australia’s most exceptional artists. This is the first exhibition to explore the conceptual links between the works of Patricia Piccinini and Joy Hester, relating Hester’s expressionistic ink drawings of blended identities to Piccinini’s depictions of intermingled human, non-human and hybrid forms.

For Hester, a member of Melbourne’s ‘Heide circle’ during the 1940s and an artist whom Piccinini has admired throughout her career, these ideas appear in the exhibition through two series of works: Love (1949), and Lovers (1955–56). Hester’s powerful and fluent use of brush and ink show a man and woman unified in an expression of togetherness, so much so that their faces in the Love series often share an eye, and yet, her works are underpinned with a sense of unease. As Hester remarked in a letter to Sunday Reed in 1947, ’how can I love [him] when he is me! … He is the "man” of me and I am the “woman” of him … we are part man, part woman … It’s like a puzzle, piecing oneself together …’

In Piccinini’s internationally renowned contemporary practice, figures are brought together in several formations, often in the form of large-scale realistic sculptures. Many of Piccinini’s depictions are hybrid, so that within the work is another fused coupling—whereby the figure has become a chimera, part human and part animal.

Like Hester, Piccinini has a debt to surrealism in her work: distorted forms; an interest in the uncanny; and an attraction to the unconscious. Additional parallels can be seen through the expressionistic psychological anxiety in Hester’s drawings, which evokes a sense of disquiet that is also apparent in Piccinini’s works. Moreover, the level of tenderness and care within Piccinini’s figures return us to the heart shaped forms in Hester’s drawings on paper, in which the man and woman hold each other in enduring unity.

Hester and Piccinini each create these works in the wake of tumultuous changes in their midst. Janine Burke, a published expert on the work of Joy Hester, has shown that Hester created drawings in the wake of the Holocaust. In 1945, Hester saw newsreel footage of the concentration camps and made drawings of some of the scenes. It is important to recall that, for the artist and her contemporaries in the ‘Heide circle’, the horrific atrocities of World War II were very fresh. (Indeed some of the artists served in the military). Images of death, violence, anxiety and isolation permeated the period. In the existing literature on Hester, the emotional and psychological tension in her work has, more often than not, been attributed to her own personal life story of separation and illness. However, as an artist attuned to the emotional tenor of her own era, it is not surprising that her images of love and lovers would be complex rather than sweet. The facial expressions vary from repose, to ecstasy, and to apprehension. Using the white of the paper support for the images, Hester creates passages of black, grey, and colours such as red, orange, blue and yellow, to configure a sequence of merged forms. The figures often share a hairline, a shoulder, eyes, mouth, noses and necks.

These mostly heterosexual images of love vary from a sense of intimate embrace (Love c. 1949) where the male and female forms are equally weighted in the image, to a sense of shadowy claustrophobia, where one figure seems to be almost devouring the other (Love 1949). In many of the works the female figure is in the foreground, as if it is the subject of the work. Denise Mimmocchi has suggested that in Lovers II, 1956, ‘[t]he male figure, as in all the works from this series, appears as a shadowed presence, suggesting an ambiguity to the couple’s closeness. It is uncertain’, she continues, ‘whether the darkened figure is threatening or rather a backdrop of security to centralize the woman’s expression and identity in the piece. The Lovers series infers the paradoxical split of intimate relationships; the tension between an interior craving for closeness and its disturbance of personalized spatial boundaries’.

The exhibition includes two poems by Hester, who displayed her handwritten poems, with her drawings in her exhibition at the Melbourne Bookclub Gallery in 1950. The poem Heart (1949), suggests the image of a secret box, filled with wings of birds, flowers and a ‘moonwashed thought’. It is a box filled with images of love and softness. The poem, Love (1950), evokes time both suspended and passing as the lovers connect in the ‘Bejewelled wonderment of night’. There is far more joy in the poems than there is in the works on paper, but in combination, we can see that, like the fluid washes of ink that Hester uses, there is a shifting concept of love permeating the works.

Piccinini has often cited the era of the Anthropocene as a context for her own work. We are participating in an era of extinction that is unprecedented. Deborah Bird Rose has commented:

Love in the time of extinctions … calls forth another set of questions. Who are we, as a species? How do we fit into the Earth system? What ethics call to us? How to find our way into new stories to guide us, now that so much is changing? How to invigorate love and action in ways that are generous, knowledgeable, and life-affirming?

The selection of Piccinini’s works in this exhibition falls into three main groups: representations of mother and child (or children); works about the relationship between the child and animal; and sculptures that explore the possibility of a connection between animate and inanimate entities. While the figures and forms themselves do not appear to express anxiety, there are moments of sadness in the expression, for example, of the mother in The Young Family, 2002, as she contemplates her use as a provider of replacement organs for the human species. Often, anxiety is a response that is engendered by the works themselves: as they seamlessly transition from human to animal, from animate to inanimate, the prospect of our own technologically driven future becomes apparent. We are invited to encounter the figures in these sculptures, drawings, photographs and videos, and embrace their differences from us, both recognising that there is no such thing as perfection, but also acknowledging that humans and animals share experiences. In The Fitzroy Series, 2011, we see the interaction between children and hybrid animals in a local Melbourne suburb as a form of co-habitation. This co-belonging in the interiors and streets of Melbourne sees chimeras undertaking everyday activities—like hunting for food in a rubbish bin—while in one image, Street, 3.10am, the we see a juvenile, ape-like humanoid. These images of everyday survival and play posit the artificial and natural as intertwined terms. In the third group, works such as Joined Figure, 2016, combine forms that are neither entirely man-made nor completely natural. The blended properties of these works depict another kind of future, one in which our environment has produced organic, yet unrecognisable, entities.

Piccinini’s new work for this exhibition, Sanctuary, 2018, considers the endangered species of the bonobo. An elderly couple are in quiet embrace, their bodies, wrinkled with age, are captured in an intimate pose which speaks of their enduring love. Any sense of anxiety invoked by this work only exposes our own prejudices about sexual intimacy between the elderly. In this work, Piccinini pushes past our comfort zones to imagine a future of bonobo-like beings lasting into old age and resisting their fate. They are an expression of love in the time of mass extinction.

TarraWarra Museum of Art actively engages with art, place and ideas, where unexpected links between contemporary art and modernism are presented within global, national and Indigenous contexts. Each year, the Museum surveys a major Australian artist often in juxtaposition with another artist from an earlier era. This combination between Piccinini and Hester, which grew out of Piccinini’s own respect and admiration for Hester, fulfils our ongoing commitment to look at the past through the filter of the contemporary present. While there are many differences between the two artists, their combination in this exhibition reinvigorates and re-energises our accepted assessments of each of their oeuvres.